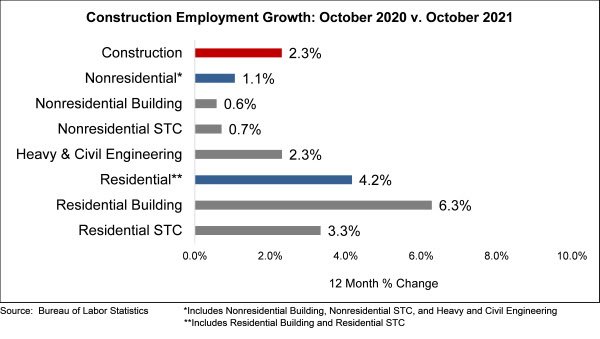 The construction industry added 44,000 jobs on net in October, according to an Associated Builders and Contractors analysis of data released today by the U.S. Bureau of Labor Statistics. Overall, the industry has recovered 963,000, or 86.5%, of the jobs lost during earlier stages of the pandemic.

The construction unemployment rate decreased to 4.0% in October. Unemployment across all industries fell from 4.8% in September to 4.6% last month. 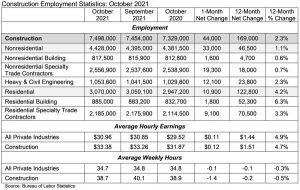 “After two months of disappointment, the U.S. employment market bounced back, adding 33,000 nonresidential construction jobs in October in the process,” said ABC Chief Economist Anirban Basu. “Many economists believed that seasonal adjustments artificially suppressed statistical employment growth in September. That appears to have been correct. Nonetheless, employers continue to report difficulty filling available positions and job growth has slowed significantly since the initial periods of the economic recovery.

“The expectation is that labor force participation will continue to pick up going forward, albeit gradually,” said Basu. “Over time, economic activity will trend toward normalcy: steadily dissipating inflation, fewer input shortages, slower wage growth and more typical construction delivery costs. Unleashing that dynamic will be critical to keeping the current recovery going. Notably, contractors expect sales to increase over the next six months, according to ABC’s Construction Confidence Index.

“With workers remaining scarce, businesses have stepped up equipment purchases to boost productivity,” said Basu. “Indeed, the most recent bout of labor shortages will prompt many contractors to increase their purchases of emerging technology and equipment. While those purchases, along with associated training costs, may limit cash flow in the short term, ultimately it will translate into faster productivity growth and expanded enterprise profitability in the more distant future.”