Two years into a global pandemic, it feels cliche to call our times unprecedented. Yet with so many pundits predicting COVID-19 would bring the United States economy to a crash­ing halt, very few guessed it could be at the hands of workers who were fed up with their work conditions.

The U.S. Bureau of Labor Statistics has confirmed this new era of workforce challenges, dubbed The Great Resignation, cannot be ignored. In November 2021, 4.5 million people quit their jobs in the USA, the highest number ever recorded since the Bureau began reporting this statistic in December 2000. This is a 29% increase over the 3.42 million workers who quit in November 2020, and represents roughly 3% of the total workforce in the United States.

With two years behind us, we’ve figured out ways to mitigate the impact of COVID-19 on the Amer­ican economy, but nobody had built a playbook to fight the epidemic of worker frustration and apathy.

The same month 4.3 million workers quit their jobs in the United States, the team at KnowHow launched the Restoration Workforce Survey, the largest-ever industry survey targeted specifically at capturing the voice of the industry’s workforce. Together with C&R and more than dozen other industry partners, KnowHow surveyed hundreds of workers across the USA and Canada, drawing from more than ten dif­ferent common roles to discover, among many other things, why each worker chose their current job, the best and worst parts about working in the restoration industry, and why good people quit. The results have implications in every corner of a restoration busi­ness, but cast a clear spotlight on the manager/em­ployee relationship and the role leaders can play in attracting and retaining top talent amidst significant uncertainty and change.

The full findings are available at whyworkersquit.com, but here are the brass tacks on the impact man­agement has on employee retention, job satisfaction, and the ways your company can emerge from the Great Resignation stronger than ever.

What motivates a worker in the restoration indus­try to leave their current workplace and find a new opportunity? The answer varies based on the type of worker you’re asking, but one thing is clear: there are few factors that can repel good employees quicker than a bad relationship with management.

Bad management and communication was the #1 reason good people leave their companies, according to both field techs and office workers. Their answers were plagued with references to toxic managers, favoritism, or a lack of professionalism among the leaders at their company. As one worker put it, “up­per management is the absolute worst, very knee-jerk reaction-based without thinking of the repercussions of their actions in consideration for the technicians.”

Remarkably however, when managers were asked the same question, they were not as quick to throw themselves under the bus. Instead, they placed all the responsibility on the worker. When asked why good people quit, most managers responded by saying that
a) the good staff don’t quit (only the bad ones do – if they were good, they wouldn’t have quit), or b) staff quit because they can’t handle the heat of the indus­try. As we carefully evaluated survey responses, we observed that many managers used words like “un­disciplined” or “lazy” when giving their perspective on why workers quit.

Think about the chasm that this creates! Workers are walking away from their jobs because they are fed up with management, while management is turning around and blaming the workers for leaving. This stalemate of opposing perspectives was observed in responses from coast to coast.

One might be tempted to think that the problem here is young, incoming workforces who lack loyal­ty to their companies and simply pack up their ball and go home when they get bored. According to the Restoration Workforce Survey however, the answer isn’t that simple.

Should I Stay or Should I Go?

If The Great Resignation is nothing more than angsty workers wanting a change of scenery, we would have seen some very different answers to the anonymous question, “Where do you see yourself in one year?” Instead, a whopping 70%+ of young workers planned to be working at the same company, in either the same position or with an increase in responsibility.

Less than 10% of Gen Z and Millennial workers plan on switching jobs or industries anytime soon, and Gen Z workers especially are increasingly look­ing for jobs that can guarantee security amidst great economic uncertainty.

Yet workers are quitting, in record numbers. This means these resignations are not premeditated, but instead are the result of something going wrong and disrupting these workers’ plans.

What could some of these issues be? Well, the workers themselves gave us a clue when they indicated it was a bad relationship with management that could cause good people to quit. Diving deeper into this relationship, we quickly discovered where there was ample room for improvement.

Rough Around the Edges

First, the good news, as you’ll see below: a majority of workers, regardless of age, said they didn’t feel the need for their manager to change their approach. 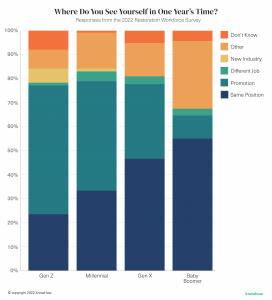 But this was far from a unanimous endorsement of their managers, and there were still plenty of opportunities for growth to be uncovered.

The biggest request among Gen Z workers was that their managers improve their com­munication, equipping them with more information so they could do their jobs well with­out having to constantly check back or get clarifying informa­tion. As one worker put it, “Our manager expects us to know everything about how to do this job by reading a single sheet of paper.” For those new to the industry, this feeling of being overwhelmed and unable to keep up clearly has a long-term im­pact on morale and enthusiasm for their job. At best, growth is hamstrung because workers can’t operate autonomously. At worst, employees begin to feel dumb and frustrated as they can never get too far without their man­ager correcting mistakes caused by a lack of proper instruction, handing over information ‘just­in-time’, and/or keeping the entire operation reliant on one person. This dynamic of manag­ers being a single point of failure for how-to and project infor­mation was not only a source of worker frustration, but also of manager stress and burnout.

Additionally, a number of workers took issue with the temperament of their manager, pointing

out that a lack of soft skills was causing problems in their relationship with their direct reports. To quote one survey respondent, “Our man­ager needs more patience with everyone. He can get stressed out and then take that out on others.” While impatience was a common theme in survey re­sponses, others mentioned a lack of confidence or narcissism that created undue stress at work.

Workers primarily accept a new position because they are motivated by the team culture or growth opportunities at their new workplace. However, it’s clear their relationship with their manager has the ability to significantly quell this enthusiasm. With over 70% of young workers hoping to stay at their place of employment over the next year, what can be done to help ensure that more of them meet this goal? Well, the Resto­ration Workforce Survey uncov­ered some insights about that too.

While many opportunities to improve the relationship between workers and managers emerged in the Restoration Workforce Survey, the team at KnowHow also unearthed some clear signs of hope and optimism.

Leighton Healey is the Chief Executive Officer of KnowHow, a software platform that helps leading property restoration companies become process-driven organizations to overcome today’s greatest workforce challenges and accelerate growth. He is the Co-Author of Why Workers Quit, the official complete analysis of the Restoration Workforce Survey, available at whyworkersquit.com.

PrevPreviousRIA Insider: Essential Lessons In Mold Remediation
NextDear David: Why Does Doing the “Right Thing” Get Me in Trouble?Next 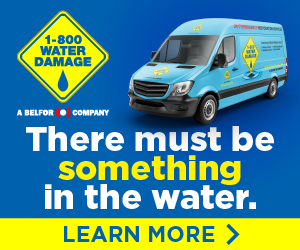